Fifty Shades of Grey: A Review on the Novel

You’ve a love story to tell to the world.

A boy meets a girl; they fall in love instantly (s’times lately); they separated and then they reconcile again.

This is the basic structure. Now, to make it unique you used a theme like unrequited love or star-crossed lovers or s’thing like that. But, hold, you want s’thing more unique. S’thing like people never thought of or might thought of but never consider that it can use to write a story of love.

Fifty Shades of Grey by E.L. James was the result of this thought as I decipher after completing the book last night. It follows the plain and simple pattern of a love story. We knew the story already. But, for this review sake, I’m going to summarize the read and known plot. 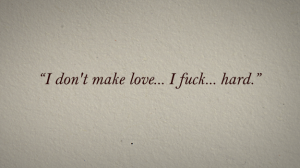 Multi-billionaire entrepreneur Christian Grey falls in for Anastasia “Ana” Steele. No, not in love, but, he thought that she is perfect for fulfilling his sexual needs through BDSM (Christian confess this towards the end of the book). But, eventually, they fall in love for each other. Christian never wanted to hurt Ana and Ana to make him happy (s’times it seems she was fulfilling her sexual needs or urge) accept all he asked her to do. This first part ends with separation as Ana pushed Christian to hit her badly (with belts); Christian after much reluctance accept her urge and perform the act on her. Ana understood they are incompatible. The part end with Ana at her shared apartment crying profusely.

Next, comes the writing pattern. The language flew like a mountain river. If you start at page 1, you’ll find, when you decides to call it a day, you’ll find you’ve read 60 or 70 pages. Another thing that E.L. James had used with elan was the checkov points and foreshadowing. This reason makes the book more interesting. One of the great hooks, if you ask me, was Christian not denying on a turmoil childhood but he was not spilling the beans completely.

For this incomplete words (read cliffhangers) I’m going to read the sequels also to see where the story leads. Though, I know it’ll be reconciled of Ana and Grey. And as for rating goes, I’ll rate at 2.5 stars and that’s too for the writing pattern and not for the story or depictions of the scenes.

13 responses to “Fifty Shades of Grey: A Review on the Novel”